Title: The Wicked King (The Folk of the Air #2)

By: Little, Brown and Company

The first lesson is to make yourself that strong.

Jude has bound the wicked king, Cardan, to her, and made herself the power behind the throne. Navigating the constantly shifting political alliances of Faerie would be difficult enough if Cardan were biddable. But he does everything in his power to humiliate and undermine her, even as his fascination with her remains undiminished.

When it becomes all too clear that someone close to Jude means to betray her, threatening her life and the lives of everyone she loves, Jude must uncover the traitor and fight her own complicated feelings for Cardan to maintain control as a mortal in a faerie world.

🌸 Book One: The Cruel Prince by Holly Black

This book is really AMAZING. I’m in SHOCK for that ending. I’m SO surprised. I love that even though I already knew everything about how this story works, it managed to surprise me. I’m very pleased with this second installment, it’s a dark fantasy, with deep characters and a charming political intrigue, where anything can happen. Although I prefer the first book a little more over this one, I must say that The Wicked King is fantastic, it really is, and opens many new intrigues for the grand finale, so I can’t wait for the next book 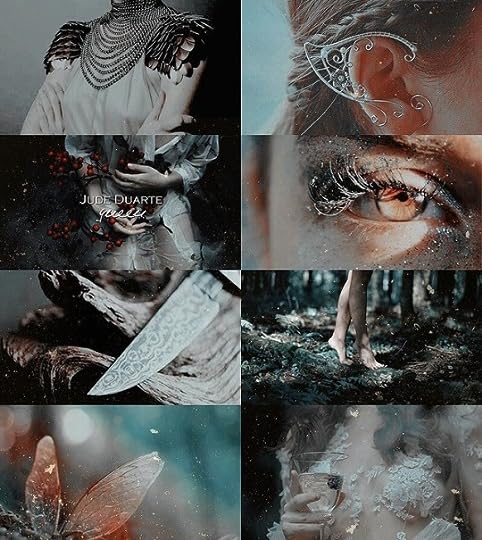 In this second book we follow Jude exercising a new role within Elfhame as the right hand and controller of the now King, Cardan, but meanwhile, he’ll do everything in his power to humiliate her and take her to her limit. But although Jude seems to have everything under control, she soon finds out that someone she loves has betrayed her, and must face new dangers and enemies to keep the place she calls home safe.

I feel the same way about, that with the first book, because as with The Cruel Prince, at first, it was difficult for me to get into the world and feel really committed to the plot, I don’t know why it’s always difficult for me to get into these books, but once I move through it, I didn’t have any problems and began to enjoy more and more. This book is full of potential dangers around every corner and following Jude for me is always a pleasure, is one of my favorite female characters and this book only increased my love for her. I love how the author handles political intrigues, it’s something that I’ve just started to enjoy more now, so it’s a pleasant surprise to see how there’s even more of that in this second book. And although I have almost no negative things to say about it, I think that the book really starts to stand out itself more and more after the 50% and that’s only why my rating hasn’t been higher because the content itself is WONDERFUL

Sometimes we can feel that second books feel like bridges between the first one and the third one, especially in trilogies, but this time I didn’t feel that this was a book that hasn’t contributed, on the contrary, a lot happens in it, you’ll be able to know in-depth to many of the characters and also has a lot of epic scenes that you’ll surely remember some time after reading it. It felt like a story that stands by itself and I loved that, it shows the great commitment of the author with this wonderful plot and its characters

I’m not entirely sure about the world building, I love the Fairies world as such, and I think it has a lot of potential, but when it comes to expanding the map and showing other realms and talking about them, I don’t know, I feel that it’s very superficial and although I understand that the author doesn’t want to lose thousands of pages in descriptions, it felt somewhat flat. Especially when we meet new characters, I don’t understand where they come from that well, maybe this is just me, but it has been a bit confusing. Leaving this aside, I LOVED the idea of using nature as a war element, that was wonderful and very magical

The characters are really good, I keep thinking that they’re excellently created, it’s like I can imagine the next movement of each one based in their personalities. There’s something so real in each one of them, you may like some more than others but there’s no doubt, they’re brilliant.

Jude, it’s really EVERYTHING, I love her, she’s so strong and she has proven again that she can against anything, I’m eternally proud of her bravery and wit. There were moments in which I really felt sorry for her, I think she’s pushed to her limits in this book and was so cruel, but I think it will be fantastic to see how she decides to return all that pain. I’m definitely too excited for the next book, Jude is the most badass girl ever and I love my girl.

Cardan has always been a strange character for me, in the first book I didn’t feel connected to him at all, in fact, I didn’t like him really, nor did I believe in that connection between him and Jude that everyone was talking about. But this book has changed my mind a bit, I began to get more and more interested in Cardan and knowing more about his personal story and about his true feelings and thoughts made me understand some of his actions and even feel empathy for him, even so, It’s not my favorite character, but I’m intrigued to know what will happen after that ending, cause WOW, it was so unexpected

Madoc is a character I’m fascinated by, for some reason it makes me feel the same way I feel about Jude. I know he’s a treacherous man and many of his actions are 100% questionable, but OMG, he’s so clever and crafty, there’s no doubt that he was the one who raised Jude. I really enjoyed the scenes of these two together, their dialogues have no waste, the tension I felt when reading them was very real. Also, I like how you never know what will happen when he’s around or what his next move will be. I just think he’s an INCREDIBLE character

And while all the characters have surprised me for good, Taryn continues to disappoint me. She’s a treacherous bitch, always choosing others over her sister. You know what, Taryn? FUCK YOU. If she even appears in the next book, I’ll scream

I loved the Roach and the Bomb and I love to know more about their pasts, on the other hand, I’m a little disappointed with Vivi and her participation in this book, I like her character but she doesn’t contribute to anything, I love the last scene, though. Then we have Locke who was my disappointment of the previous book, and this time his actions were predictable, but although he’s a bad person and I don’t like him, I still prefer him, 1000 times over Taryn, I’m just saying it lol

I like the incorporation of new characters too, I think one of my favorite things is that you never know who to trust in, something that this book has taught me is that anyone can be the next who betrays you, and in a certain part, even though it’s cruel, I LOVE THAT.

The writing style is captivating, I liked it a lot, especially the dialogues, are very well constructed. If you let yourself be carried away by the story, you really feel as if you were there among the characters, the writing style always allows me to visualize everything in my mind with great clarity. This book undoubtedly feels like a movie

Well let’s talk a little about the romance, in the first book this was something I wasn’t interested in, but this time I must say that I get it. From the first time I read a Cardan and Jude scene together, I was like: I WANT MORE!, I couldn’t wait to read the next one. There’s very real chemistry between the characters, I personally feel it as a physical attraction, I know that something else is happening, obviously, but I can’t stop thinking how sexy these two are together and I love that, it was a very addictive romance. I ask myself right now if I would like this to be something more, like a cheesy romance?, and honestly, NO, I think this is what they are like, seductive, dark and passionate and I wouldn’t change it.

The plot twists are AMAZING and take me by surprise, every time. I could see coming nothing of what happened and that’s great. This book is full of twists, I really can’t believe how much has happened in a single book. I’ve wanted to see a war, BUT I got a lot of intrigue and tension, so I’m not complaining. Besides, these plot twists have the peculiarity of being full of treason. I think many changes will come in the next book and now that I think about it, the name: “The Queen of Nothing”, is absolutely perfect and makes so much sense.

I highly recommend these books, I know that the hype is REAL, and sometimes that can be scary, but if you haven’t read it yet, I recommend you do it. Coming from someone who never likes books with a lot of hype, that has to worth something. The Wicked King, in particular, is full of action, betrayal, desire, power, and ambitions. And it’s so UNEXPECTED AND WONDERFUL, you can’t miss it!

17 thoughts on “Book Review: The Wicked King (The Folk of the Air #2) by Holly Black”