🍂 Hi, my beautiful bookish friends! I hope you’re having the most incredible day with the best readings.❤️ Today I bring you a new Monthly TBR, where I share with you my reading plans for the month of June. Well, another month and other new challenges to undertake, I’m excited for June, I feel it will be THE month, where I’ll finally read everything I plan. 👏🏻 In general, I’m very good at following my TBR, but last month I was messy with that, so this month I hope I can stick to my plans, I know I can do it! I wasn’t planning, though, to participate in anything this month… BUT I found many incredible readathons taking place in June, some of you let me know of many readathons through Twitter, which I’m very thankful for, and I decided to give one of them a chance to have a little fun while reading, also everything fits perfectly with my book pile.

So, the readathon I’ve chosen is Make Your Myth-Taker readathon, which I absolutely adore because it’s amazing, fun, and super original. 😍  It’s created by Ashleigh from A Frolic Through Fiction and takes place throughout the whole month of June, for more information better explained and more detailed I’ll leave you here the video of the announcement with everything you need to know. In summary, this readathon is based on choosing a fictional character and following a series of promps to become her/him. There are 4 groups: Warrior, Royal Court, Rogue & Sorcerer, of these each group there are 4 characters from which you can choose one or several as you want, to follow her/him path. Later I will show you which character and which group I’ve chosen to be, but yes! I think it will be a lot of fun and I hope that many people will join!  🌟

On the other hand, I also want to incorporate in this challenge books that are on my lists of mini-TBRs for this year, you know that I want to try to read more sci-fi, so I have incorporated one of which I don’t know much, but I know that it’s very loved and recognized. I try reading it once, but it didn’t work, so it’s also like a second-chance reading. 🚀
In addition, as always, I’ll be incorporating an ARC, for which I will be participating in the blog tour  📚
And last but not least, I’m about to finish reading my 2020 5-star predictions, so here you’ll also see another one that I’ll be trying, SUPER EXCITED because honestly, I feel that I’ll love this book, the premise sounds amazing to me and I’ve heard the best things. 😄
Apart from all this, I really want to try to read much more of the books that I’ll be putting and sharing with you in this post. I’ve decided that it feels good for me this month to try to follow my mood and choose something during the month simply without planning it, surely from my physical TBR, so I’ll be sharing it later and maybe you can even help me choose other books. I hope this isn’t confusing for you, but I hope it works for me and somehow be more relaxing and be able to read a little more of just what I feel at the moment, you know?  🥰
So I don’t want to waste any more time, I’m very excited to share my plans for this month with you and I hope you enjoy it, LOVE YOU FOREVER! 🍂

🍂 Illuminae (The Illuminae Files #1) by Amie Kaufman & Jay Kristoff | Kady thought breaking up with Ezra was the worst thing she’d ever been through. That was before her planet was invaded. Now, with enemy fire raining down on them, Kady and Ezra are forced to fight their way onto one of the evacuating craft, with an enemy warship in hot pursuit.
But the warship could be the least of their problems. A deadly plague has broken out and is mutating, with terrifying results; the fleet’s AI, which should be protecting them, may actually be their biggest threat; and nobody in charge will say what’s really going on. As Kady plunges into a web of data hacking to get to the truth, it’s clear only one person can help her bring it all to light: Ezra.
Told through a fascinating dossier of hacked documents–including emails, schematics, military files, IMs, medical reports, interviews, and more–Illuminae is the first book in a heart-stopping, high-octane trilogy about lives interrupted, the price of truth, and the courage of everyday heroes.

🍂 Circe by Madeline Miller | In the house of Helios, god of the sun and mightiest of the Titans, a daughter is born. But Circe is a strange child—not powerful, like her father, nor viciously alluring like her mother. Turning to the world of mortals for companionship, she discovers that she does possess power—the power of witchcraft, which can transform rivals into monsters and menace the gods themselves.
Threatened, Zeus banishes her to a deserted island, where she hones her occult craft, tames wild beasts and crosses paths with many of the most famous figures in all of mythology, including the Minotaur, Daedalus and his doomed son Icarus, the murderous Medea, and, of course, wily Odysseus.
But there is danger, too, for a woman who stands alone, and Circe unwittingly draws the wrath of both men and gods, ultimately finding herself pitted against one of the most terrifying and vengeful of the Olympians. To protect what she loves most, Circe must summon all her strength and choose, once and for all, whether she belongs with the gods she is born from, or the mortals she has come to love.

🍂 Sorcery of Thorns by Margaret Rogerson | All sorcerers are evil. Elisabeth has known that as long as she has known anything. Raised as a foundling in one of Austermeer’s Great Libraries, Elisabeth has grown up among the tools of sorcery—magical grimoires that whisper on shelves and rattle beneath iron chains. If provoked, they transform into grotesque monsters of ink and leather. She hopes to become a warden, charged with protecting the kingdom from their power.
Then an act of sabotage releases the library’s most dangerous grimoire. Elisabeth’s desperate intervention implicates her in the crime, and she is torn from her home to face justice in the capital. With no one to turn to but her sworn enemy, the sorcerer Nathaniel Thorn, and his mysterious demonic servant, she finds herself entangled in a centuries-old conspiracy. Not only could the Great Libraries go up in flames, but the world along with them.
As her alliance with Nathaniel grows stronger, Elisabeth starts to question everything she’s been taught—about sorcerers, about the libraries she loves, even about herself. For Elisabeth has a power she has never guessed, and a future she could never have imagined.

🍂 The 7½ Deaths of Evelyn Hardcastle by Stuart Turton | Tonight, Evelyn Hardcastle will be killed… again.
It is meant to be a celebration but it ends in tragedy. As fireworks explode overhead, Evelyn Hardcastle, the young and beautiful daughter of the house, is killed.
But Evelyn will not die just once. Until Aiden – one of the guests summoned to Blackheath for the party – can solve her murder, the day will repeat itself, over and over again. Every time ending with the fateful pistol shot.
The only way to break this cycle is to identify the killer. But each time the day begins again, Aiden wakes in the body of a different guest. And someone is determined to prevent him ever escaping Blackheath… 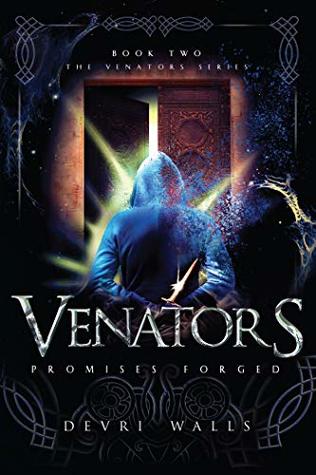 🍂 Venators: Promises Forged (Venators #2) by Devri Walls | It has been mere days in the world of Eon, where Rune Jenkins, her twin brother Ryker, and their friend Grey have been trapped, fighting for their lives. After discovering the truth of their ancestry, the three are far from home, and far from anything resembling their mundane lives of the past.
While Ryker is still held captive by the eerily beautiful Zio and her goblins, Grey falls into the clutches of Feena, the Fae queen. She begins to drain his soul bit by bit to feed her dark underground garden, and Grey has no hope of escaping on his own.
It is now up to Rune to save Grey, as his precious time slips away inexorably. But the Council has denied her permission to embark on a rescue mission, until she can harness her Venator gifts and prove herself capable of venturing into the Fae queen’s territory. As Rune discovers that promises in Eon are forged with life-or-death consequences, she realizes that she must act quickly, or else be swallowed – and Grey along with her – by the dangers of Eon.