🍂 Hi, my beautiful bookish friends! I hope you’re having the most incredible day with the best readings.❤️ Today I bring you a new Monthly TBR, where I share with you my reading plans for the month of May. Super excited for my TBR this month, you know that I’ve been participating in the OWLs the previous month and it was a lot of fun, and I was able to read everything I planned and a little more, so this month I feel quite motivated to continue with that energy and read a lot. 😊 I know and am aware that I may not finish all my readings but even so, I feel so genuinely eager to read each one of these books that I know that at least I’ll be trying and I hope it’s a fun experience and I manage to keep a good reading rhythm. 📚 I’m not participating in any reading challenge other than those that I’ve imposed on myself, so I have put together a very diverse and promising stack to read and I’m excited to share it with you.  👏🏻

I know that I always thank you in my Wrap Ups, but since I’m writing these post with a lot of anticipation, I wanted to thank you again because April has been the best month of the year for my blog and I owe everything to your support, I’ve also had the pleasure and the blessing of being “blog of the day” on Twitter, for the third time! 😍 Which is crazy, but I appreciate it SO SO much and I use all that support as a great incentive to keep working and improving every day. SO HAPPY, I have a lot of fun ideas and discussions and weird posts for this month lol, so I hope you decide to stay there to share it with me and if you’re new and just start following the blog, THANK YOU SO MUCH, it means the world to me! ❤️

So going back to my readings, I’ve decided to continue with my personal challenge of reading popular old YA series, and this month you will surely excited as much as I am, I think it’s time that I have an opinion on these SO beloved books. 🥰 Then, you know that I’ve created mini-TBRs in order to read more genres and this month I’ve decided to start with my Sci-Fi stack, so you will see what my choice is, I’m a little nervous about this one, but also intrigued, you know this is a hit or miss genre for me, so we’ll see *fingers crossed* 🚀
I’ll also be continuing some series that I’m enjoying very much and these continuations really sound AMAZING, and I can’t wait to read about all these characters again. 🌟
Last but not least, I’ve included an ARC which despite not having heard much about it, sounds very good, and I’m excited to read it. 👍🏻
So without further ado, I hope you have a wonderful month, and let’s start, I’m SO excited to share with you what I’m going to be reading! 🍂

🍂 Of Silver and Shadow by Jennifer Gruenke | Ren Kolins is a silver wielder—a dangerous thing to be in the kingdom of Erdis, where magic has been outlawed for a century. Ren is just trying to survive, sticking to a life of petty thievery, card games, and pit fighting to get by. But when a wealthy rebel leader discovers her secret, he offers her a fortune to join his revolution. The caveat: she won’t see a single coin until they overthrow the King.
Behind the castle walls, a brutal group of warriors known as the King’s Children is engaged in a competition: the first to find the rebel leader will be made King’s Fang, the right hand of the King of Erdis. And Adley Farre is hunting down the rebels one by one, torturing her way to Ren and the rebel leader, and the coveted King’s Fang title.
But time is running out for all of them, including the youngest Prince of Erdis, who finds himself pulled into the rebellion. Political tensions have reached a boiling point, and Ren and the rebels must take the throne before war breaks out.

🌗 Reading a Popular YA Series 🔥

🍂 The Hunger Games Trilogy by Suzanne Collins | WINNING MEANS FAME AND FORTUNE. LOSING MEANS CERTAIN DEATH. THE HUNGER GAMES HAVE BEGUN. . . .
In the ruins of a place once known as North America lies the nation of Panem, a shining Capitol surrounded by twelve outlying districts. The Capitol is harsh and cruel and keeps the districts in line by forcing them all to send one boy and once girl between the ages of twelve and eighteen to participate in the annual Hunger Games, a fight to the death on live TV.
Sixteen-year-old Katniss Everdeen regards it as a death sentence when she steps forward to take her sister’s place in the Games. But Katniss has been close to dead before—and survival, for her, is second nature. Without really meaning to, she becomes a contender. But if she is to win, she will have to start making choices that weight survival against humanity and life against love.

🍂 Rebel (Legend #4) by Marie Lu | Respect the Legend. Idolize the Prodigy. Celebrate the Champion. But never underestimate the Rebel.
Eden Wing has been living in his brother’s shadow for years. Even though he’s a top student at his academy in Ross City, Antarctica, and a brilliant inventor, most people know him only as Daniel Wing’s little brother.
A decade ago, Daniel was known as Day, the boy from the streets who led a revolution that saved the Republic of America. But Day is no longer the same young man who was once a national hero. These days he’d rather hide out from the world and leave his past behind. All that matters to him now is keeping Eden safe―even if that also means giving up June, the great love of Daniel’s life.
As the two brothers struggle to accept who they’ve each become since their time in the Republic, a new danger creeps into the distance that’s grown between them. Eden soon finds himself drawn so far into Ross City’s dark side, even his legendary brother can’t save him. At least not on his own . . .
With unmatched suspense and her signature cinematic storytelling, #1 New York Times—bestselling author Marie Lu plunges readers back into the unforgettable world of Legend for a truly grand finale.

🍂 Soul of the Sword (Shadow of the Fox #2) by Julie Kagawa | One thousand years ago, a wish was made to the Harbinger of Change and a sword of rage and lightning was forged. Kamigoroshi. The Godslayer. It had one task: to seal away the powerful demon Hakaimono. Now he has broken free.
Kitsune shapeshifter Yumeko has one task: to take her piece of the ancient and powerful scroll to the Steel Feather temple in order to prevent the summoning of the Harbinger of Change, the great Kami Dragon who will grant one wish to whomever holds the Scroll of a Thousand Prayers. But she has a new enemy now. The demon Hakaimono, who for centuries was trapped in a cursed sword, has escaped and possessed the boy she thought would protect her, Kage Tatsumi of the Shadow Clan.
Hakaimono has done the unthinkable and joined forces with the Master of Demons in order to break the curse of the sword and set himself free. To overthrow the empire and cover the land in darkness, they need one thing: the Scroll of a Thousand Prayers. As the paths of Yumeko and the possessed Tatsumi cross once again, the entire empire will be thrown into chaos.

🍂 Come Tumbling Down (Wayward Children #5) by Seanan McGuire | The fifth installment in Seanan McGuire’s award-winning, bestselling Wayward Children series, Come Tumbling Down picks up the threads left dangling by Every Heart a Doorway and Down Among the Sticks and Bones
When Jack left Eleanor West’s School for Wayward Children she was carrying the body of her deliciously deranged sister–whom she had recently murdered in a fit of righteous justice–back to their home on the Moors.
But death in their adopted world isn’t always as permanent as it is here, and when Jack is herself carried back into the school, it becomes clear that something has happened to her. Something terrible. Something of which only the maddest of scientists could conceive. Something only her friends are equipped to help her overcome.
Eleanor West’s “No Quests” rule is about to be broken.
Again. 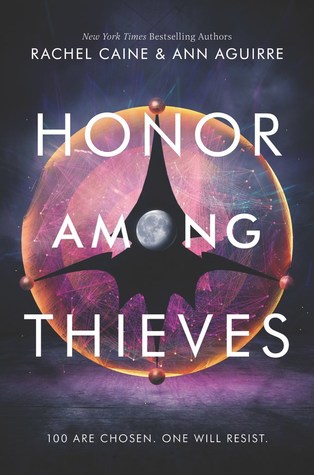 🍂 Honor Among Thieves (The Honors #1) by Rachel Caine & Ann Aguirre | Petty criminal Zara Cole has a painful past that’s made her stronger than most, which is why she chose life in New Detroit instead of moving with her family to Mars. In her eyes, living inside a dome isn’t much better than a prison cell.
Still, when Zara commits a crime that has her running scared, jail might be exactly where she’s headed. Instead Zara is recruited into the Honors, an elite team of humans selected by the Leviathan—a race of sentient alien ships—to explore the outer reaches of the universe as their passengers.
Zara seizes the chance to flee Earth’s dangers, but when she meets Nadim, the alien ship she’s assigned, Zara starts to feel at home for the first time. But nothing could have prepared her for the dark, ominous truths that lurk behind the alluring glitter of starlight.

50 thoughts on “May TBR | Reading Challenges & Continuing Series: An Ambitious but Exciting Stack 🍂”