❄️ Hi guys, I hope you’re having a wonderful day!. here I am with a new WWW Wednesday (originally hosted by A Daily Rhythm, and revived by Taking on a World of Words, where we’ll share the books that I’ve finished, my current and upcoming readings ❄️

❄️ What are you currently reading?

❄️ What did you finish recently reading?

❄️ What do you think you’ll read next?

❄️ What are you currently reading? ❄️

On the edge of town a beast haunts the woods, trapped in the Gray, its bonds loosening…

Uprooted from the city, Violet Saunders doesn’t have much hope of fitting in at her new school in Four Paths, a town almost buried in the woodlands of rural New York. The fact that she’s descended from one of the town’s founders doesn’t help much, either—her new neighbours treat her with distant respect, and something very like fear. When she meets Justin, May, Isaac, and Harper, all children of founder families, and sees the otherworldly destruction they can wreak, she starts to wonder if the townsfolk are right to be afraid.

When bodies start to appear in the woods, the locals become downright hostile. Can the teenagers solve the mystery of Four Paths, and their own part in it, before another calamity strikes?

I’m so excited about this book, I haven’t gotten much into it yet, but I love the first chapter so I’m excited to continue. I’m glad I decided to grab this one right now because I’ve wanted to read it since it came out, so I’m happy to finally be reading it. I don’t have an opinion formed yet, but soon I’ll be telling you a little more of my thoughts about. It looks spooky, which is perfect and also feels very atmospheric and was a factor that I was looking for a lot in this book so I’m excited to continue. 😊

Relic is the absorbing first novel in The Relic Trilogy, a thrillingly dark YA fantasy series.

I didn’t expect to enjoy this book as much as I ended up doing it, which is always a good thing, right? It’s a captivating dark fantasy that will hook you from the first page, for its original plot and especially for its main character, which I adored and find very relatable. Maybe the world needs a little work and development but even so, being the author’s first book is amazing and she has done an extraordinary job. I’m very grateful to have read it before its release date. In fact, the book release tomorrow so if you’re interested in reading it, which I recommend if you like fantasy, dark magic, and strong characters, you can order the book with the links that I leave here below for you. It has been a great experience and although this one hasn’t even come out yet, I want the sequel already! I’m excited to know more and know how the story will continue after that INCREDIBLE ending. 😍

The Grey Sisters by Jo Treggiari 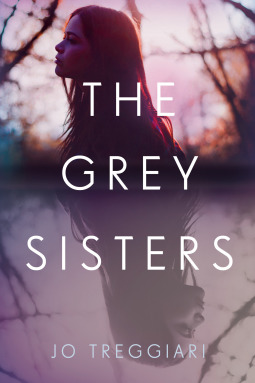 Two years after a deadly plane crash, best friends D and Spider head into the mountains to face their grief. A gripping psychological thriller for fans of The Cheerleaders and Sadie.

D and Spider have always been close friends, and they are further united in their shared heartbreak: they both lost siblings in a horrific plane crash two years earlier. A chance sighting of a beloved cuddly toy in a photograph of the only survivor spurs D to finally seek closure. She and Spider and their friend, Min, set off on a road trip to the mountainside site of that terrible crash.

Ariel has lived on the mountain all her life. She and her extended family are looked down upon by neighboring townsfolk and she has learned to live by her wits, trusting few people outside of her isolated, survivalist community. A terrifying attack sends her down the mountain for help; on her way, she comes upon the three girls — a chance encounter that will have far-reaching consequences for them all.

Oh god, I was afraid the time to talk about this book would come, I’m still working on my review so you’ll soon know my full thoughts, but I confess that I didn’t like it. I didn’t hate the book, but I can certainly see that it’s not for me, which I’m so sad about because I usually adore stories about sisters, that’s why I requested it in the first place, because of that and because the girl on the cover looks A LOT like me lol, which is spooky but I love it. Returning to the book wasn’t what I expected, it’s a story that involves loss so there’s a lot of grief during the book, but I didn’t connect with the stories or worry about the characters, which has the weirdest names I saw in a book, one of them is called Spider, and I know that I’m not North American so maybe this is something common there but OMG, what’s that? lol. Beyond that, I also don’t like how the story is built, is confusing and the views didn’t convince me, it’s also SO slow to read, took me like 3 days to read a book of 200 and some pages, which it’s quite a lot for me. It’s a shame, I thought I would love this book but it didn’t work for me.  😥

❄️ What do you think you’ll read next? ❄️

I’m almost certain that I’ll choose between these two since I’m super excited for both. But I always appreciate your help and your opinion, so tell me which one do you think I should read next? I would also love to know if you have read any of these and what’s your opinion. Many of you have already expressed your opinion and that has helped me a lot in the past, so I love doing this and talk a little about it. 💕