Mysterious doors with lizard-head knobs. Talking stone statues. A crazy girl with a hatchet. Yes, Liv’s dreams have been pretty weird lately. Especially the one where she’s in a graveyard at night, watching four boys conduct dark magic rituals.

The strangest part is that Liv recognizes the boys in her dream. They’re classmates from her new school in London, the school where she’s starting over because her mom has moved them to a new country (again). But what’s really scaring Liv is that the dream boys seem to know things about her in real life, things they couldn’t possibly know–unless they actually are in her dreams? Luckily, Liv never could resist a good mystery, and all four of those boys are pretty cute….

OMG didn’t expect this at all, being honest, but I really really liked this book!, I feel it was the reading I needed at this time, super light and fun. The fact that the author explores dreams and transforms them into such an entertaining plot is a great merit and my favorite part 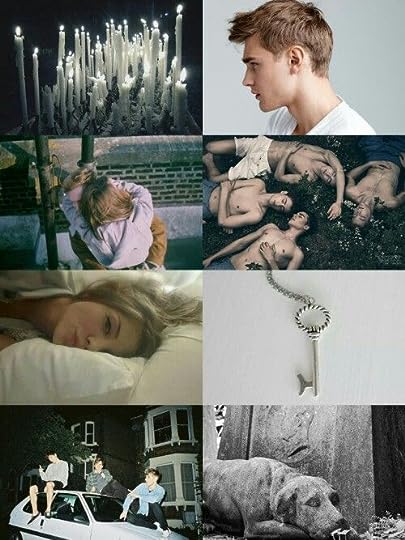 In Dream a Little Dream we follow Liv, she’s a pretty normal 15 year old girl who always has to move from one place to another due to family matters, for which she has never been able to establish herself in a single place, have friends and that kind of things. But finally she and her sister have the opportunity to establish their lives in London with their mother, but things will be a little different than how Liv imagined them. Once there, she begins to have very strange dreams, and in one of them she sees four boys practicing magic rituals in a graveyard, but the strangest thing is that she knows these guys, and they suddenly seem to know everything about her, but, how is that possible?!, unless they really are getting into her dreams. Liv can’t resist a good mystery, so she’ll get to the bottom of it all, at all costs.

There’s something so funny and dynamic about this story.
The plot, although it’s really interesting and keeps you wanting to know more, isn’t the most unique thing I’ve read, in fact, I think it has a lot of cliche everywhere, so I really have to warn you about it. But taking all that aside, I think the most interesting part of the book is the fact that almost a large part of it occurs in the dreams of our main character and that’s so much fun, I love how the author manages this aspect so that you never know what can happen, and is something really scary if you think about it, because dreams are so unpredictable, anything can happen in them.

I think about the characters and in general I feel that none has impacted me or left a big mark on me, but even so, I like how they interact and how they work with each other, there’s a lot of school drama in this book and it’s fun. There’s an anonymous person who runs a blog telling gossip about popular guys and I had all those Gossip Girl feeling lol, this is super secondary in the story, but I wanted to tell you just cause is so funny. I like Liv, her curiosity about everything is contagious and and I like how she expresses herself being in a group made up entirely of boys, I love how she wouldn’t let herself be overwhelmed by them.And then I think the other guys are the typical pupolar and super sexis ones and all those things that I would call cliche, but I think I pretty much liked Grayson, being honest. But still, I had a good time with them, and I repeat, they’re not memorable characters but it’s entertaining to hang out with them.

I’ve heard some people trying to compare this dynamic of four boys and a girl with “The Raven Boys” and I’m like “GIRRRRL DON’T DO THAT”. These books have nothing in common, each one has its own unique points but I think The Raven Boys is something incomparable (yes, I’m a fan)

The writing style is sensational, so easy to read, again it’s nothing really poetic, rather it’s simple and fulfills its function, which is to keep the reader interested. For me it was exactly what I needed so I’m happy to have found this writing style so decontracted and quick to read. Although I enjoyed it, I have to tell you that there are moments when I felt that the author was trying too hard to be funny, or at least from my point of view, I think maybe putting humor in dramatic moments is a bit weird.

There’s not much more to tell you about the plot, I honestly don’t want to start doing spoilers so I’ll stop here.
I had a great time with this book, I had fun and I was interested in everything that happened from the beginning to the end, I don’t think is something bad about the book, just some small things that I’ve already said, but I decided keep my rating like this because I feel there’s nothing in the book that really impacted me or was memorable in some way, even though I plan to continue with the series because I can see the potential and I still have questions that I would like to be answered in the following books. I feel that the characters could grow a lot, the plot as well and I’m pretty interested in finding out what will happen.

I recommend the book?: YES!. I think it would be ideal for all those who want a light book with a paranormal and mysterious touch. Also if you’re looking for a quick and fun reading I think it’s a good option