OMG! love this book so much, it’s absolutely my favorite of the series so far. The characters are fire, so many things happen here, is crazy. Every time I continue with these books the plot becomes more and more interesting, I can’t wait to continue, and at the same time I don’t want it to end!, it’s EXCELLENT 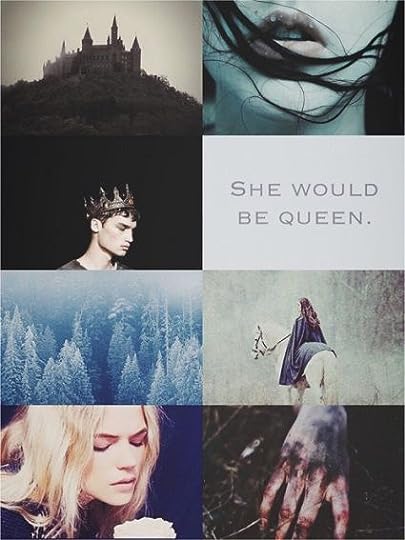 In Gathering Darkness we can see how the plot began to focus even more on the magic crystals and elemental magic as such. As you know, I can’t said too much because I try to make my reviews spoiler free but I’ll tell you as always a little about how I felt with this book, which you’ll have noticed already, I LOVED.

I think this book in particular is the most deep and impressive so far, some things are reveal, that will finally make us know the deepest desires within each character and it’s incredible, you know that I love the good characters development in books and In this opportunity there’s a lot of that. I like how each of them, despite having clear objectives, they begin to have doubts about their loyalties and relationships, that makes us see a much more human and real side of each of them.

Individually I think that Cleo‘s so strong and resistant, my love for her continues to grow and I liked to see how she has been much more involved in the events of this book, also her relationship with Magnus has taken the most interesting turn, I think that their scenes are too addictive. When you meet these characters, if you haven’t done so yet, you’ll understand what I say and if you have already read the books then you know exactly what I mean. Both are so complex and well created, these characters don’t stop amazing me. Magnus continues to be this kind of dark and ambitious character but at the same time it’s obvious that the only thing that has always wanted is the love of his father, and the interactions of Magnus with King Gaius are also very well created, you can really feel the tension between them. A part from that, I think many things are more clear in Magnus’ head and I think his growth is beginning to be noticed a lot and his goodness is coming to light, I just love this character is great.

On the other hand, we have Jonas, and I had mentioned in my previous review how I thought he had stolen the show in the previous book, but in this book he is not left behind either, I really liked to see the cruel side of Mytica through Jonas’s eyes, he continues to be very brave and loyal and it’s a pleasure to follow his story. Finally we have Lucia and WOW, she surprised me in this book, I think that her importance has grown a lot and due to she’s the only one of the main characters with a true link with magic, that made of her a very important character in this book and her growth as a character is AWESOME, it’s the one that has grown the most and her personal quest to accept her destiny is the most captivating thing, the end left me just wanting for more. It was perfect.

Plus: I just keep loving Nic more and more as I read about him, I love that he begins to have more scenes in the plot, he’s fantastic and his friendship with Cleo is gold. In additionm there are some things changing in his life and that will make him discover himself

The appearance of new characters only improved the plot and gave it more drama and action, as the brothers Kraeshians and Felix, all of them solid characters and very well created. I really believe that the way in which the writer creates her characters is fantastic and worthy of admiration, makes them so complex and unique that you can only love them

As always we can enjoy the fabulous Mytica scenarios, I really love the world where this story unfolds, I think it’s so diverse and beautiful, with different seasons and rulers it’s very nice to travel along with the characters

I want to highlight something about the plot: As long as you follow the point of view of a character you know that he has his own motivations and things that keep him going forward and you know that his goals are different from each other, but even so, in the end, the author makes that everything is connected and all their stories become one and that’s wonderful. I think it’s one of my favorite aspects of these books in general, but the way this happens in Gathering Darkness is the most interesting and best created so far

I really hope that by now you have decided to give Falling Kingdoms a chance, I can’t recommend this series enough, even when it’s complex it’s so easy to read, it has something very addictive, it’s worth trying. If you like unexpected revelations, strong characters, betrayals, family dramas, kings, princes and all those things that make an incredible fantasy, I highly recommend these books. Especially if you’re more of contemporary reads and you’re not sure what to try when it comes to reading fantasy, I think this series is a very good place to start.