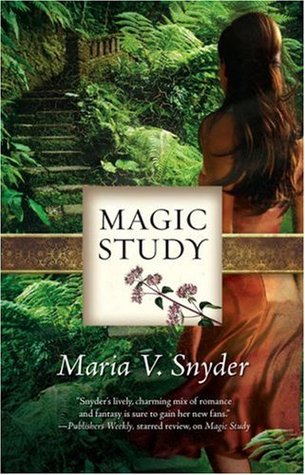 With her greatest enemy dead, and on her way to be reunited with the family she’d been stolen from long ago, Yelena should be pleased. But though she has gained her freedom, she can’t help feeling isolated in Sitia. Her Ixian background has changed her in many ways—and her newfound friends and relatives don’t think it’s for the better….

Despite the turmoil, she’s eager to start her magic training—especially as she’s been given one year to harness her power or be put to death. But her plans take a radical turn when she becomes involved with a plot to reclaim Ixia’s throne for a lost prince—and gets entangled in powerful rivalries with her fellow magicians.

If that wasn’t bad enough, it appears her brother would love to see her dead. Luckily, Yelena has some old friends to help her with all her new enemies….

I really liked this sequel, especially I enjoyed its magical aspects, which are undoubtedly the strong point of the book. Being honest, I feel that this book has taken a new direction, and this makes it completely different to the first book, even so, it was a lot of fun

In Magic Study we can learn more about Yelena’s past, and we’ll see how she has to face completely new and unexpected situations. Many aspects of her past that she didn’t know about will be revealed, while she tries to adapt to the meeting with her biological family and her customs and all of this will reveal who she really is. On the other hand we’ll also see Yelena begin to understand how her magic works and we’ll see her grow in this aspect a lot during this book. I personally think that magic is the protagonist in this occasion, that, and the incoportacion of new characters, which are ALOT and each of them will affect Yelena in some way and to her future actions as well

I want to start highlighting how much the writing style has improve from one book to another, I love that since I want to read all the books, so knowing that in each one this aspect will improve makes really me excited. It was much easier to get into the plot this time, which is obvious since I’m more familiar with the story, but I attribute it to the writing style as well, that has been very fluid and addictive since the first page.

This book in general has been very different from the first one, this is because we see Yelena established elsewhere, in a place where magic has a great weight and is very important for citizens. I remember that in Ixia magicians were not allowed then this has been a big change. I also think that the incorporation of so many new characters makes everything look new, you know? It’s as if I just started reading a new series or something like that. Being surrounded by other landscapes and other culture also made me feel far from the main story. Being honest, I think this may not work for many of you, the fact that there is a lack of connection of one book with the other can annoy you or even make you stop caring about the plot. .Personally wasn’t a problem for me at all, I enjoyed this book a lot, I loved meeting new characters and it seems very interesting to see where the plot is going now that many things have been clarified, especially the most important that focuses on the Yelena’s magical powers and what they mean in this world. That seemed great to me, I love magic when it’s well managed and certainly liked it in this book.

As for the characters, as I’ve said before, there are many new ones. I really liked the incorporation of the Master Magicians and I like that each one has a different personality, that’s fun. I love reading the Yelena and Irys interactions , I feel that their relationship has grown a lot and as you know, because I’ve said it in previous reviews, I love master-student relationships, I find them adorable and super interesting to follow. I like Dax he’s great, he’s not a main character at all, but he seems like a super sweet guy and I really like that. I’d like to know more about Leif, I think he’s a very complex character, but there’s a lot in his mind and I haven’t quite understood him yet, I find him a bit selfish the most part of the book and even though his actions are explained at the end, I feel that I need more of him to trust in this character. I’m excited to see what position Cahil will take, I think he’s a very ambitious character, so I’m also interested in him. And finally I think Ferbe as a characteris pretty creepy, it worked in some way like the villain, he’s very evil and the things he has done are horrible, so obviously the darkness inside him isn’t discussed, but still I would like to see more interaction between him and Yelena, because his scene together was too convenient and short. Ari and Janco are always two lights in the dark, I love them and I loved what they meant for Yelena in this book. (I’ve said Yelena a lot, I’m sorry, lol)

As you already know, I like Yelena very much as the main character, she has made a lot of progress in this book and I’m proud of her decisions, she has also acquired an admirable strength and courage, so I love to follow her story.

I absolutely and indisputably love Kiki, OMG this horse is the most beautiful thing in life, YES, it’s a horse and that doesn’t prevent it from being one of the best character I’ve ever read lol

There was something big that was missing and that is Valek, on the one hand, I like his absence and I understand it because he has let Yelena stand out and has given rise to new characters, but on the other hand, I think I’ve missed him too much, I liked his participation but I feel that I would have liked to see more of him. Also I think that his appearance in “dreams” was like WTF, I’m not sure if I liked that, I think I didn’t get it actually

I think the book should have finished a few chapters earlier than what it actually did, this is because I think that the end was stretched too much and all the time I was waiting for something to happen, but then there is a small “fight” that only serves to get rid of a character, which doesn’t make sense to me, it could have been interesting to leave everything for the next book and thus have been able to give a more important place to the whole fight scene that lasts about 2 seconds here

I want to clarify that I liked what happens after this scene, there is a creation of a new conflict that I think will unleash very good things for the next book, I’m excited by the position that Yelena has taken in the plot, it will be super great to see what will bring her the future after everything that happened

Finally, I’m super excited to read the next book which will be the end for this trilogy, then I understand that there is another trilogy, I guess it follows other characters in the same world, which is great. I think there will be many surprises for the end, I want to see all the new characters along with the old ones and I want to see magic and all the political drama that characterizes these books, I would really like that