Well, certainly wasn’t what I expected. The promise sounded amazing and I enjoyed several aspects, such as the beautiful writing style and the Indian mythology, but there are several points that haven’t convinced myself at the end. Even so it’s a good fantasy book and I think that if I had go into it without so many expectations then maybe I would have enjoyed it a little more.

Maya is one of the many of the Raja’s daughters, therefore a princess, but everyone thinks that she has been cursed by the horoscope and that her destiny is full of death and destruction. Although she’s not interested in getting married as her sisters have done, the Raja ends up organizing a meeting with the princes of other kingdoms to marry her and thus, with an unexpected turn, to arrange the war between the kingdoms for his kindom benefit, but when the day comes Maya is rescued by a mysterious man who promises to give her the sky and the stars if she becomes his queen

I have no doubt that Chokshi can write beautifully and poetically, I really enjoyed her writing style, I think it’s a unique and very successful thing for this kind of fantasy genre, I want to highlight it because it’s really beautiful the way that this woman can write 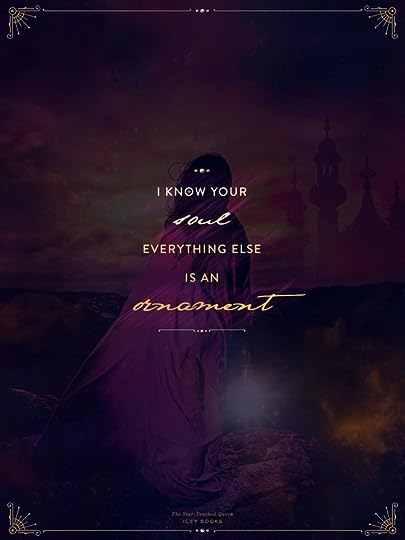 I read the book synopsis and immediately convinced myself that I wanted to read it,ie, it sounds incredible and magical!. And I would say that YES it was very magical, but I don’t think it was built correctly, I think that although the plot is very interesting I ended up being confused, I was very attracted to how the magic worked and everything catch me but then the plot focuses on other things and ends up taking weird directions that have nothing to do with the main plot. I mean, in the end I ended up not understanding how the whole thing of the threads of life and destiny worked, because although it’s a fantastic idea, it’s very poorly executed

The book is divided into two parts and although I’ve seen many people say they prefer the second part, I personally prefer the first one, I think the most interesting part of the second part is the horse-demon Kamala and omg guys, this is the best character of life lol. I found the second part of the book very confusing and meaningless, at least in the first part I still felt interested in knowing what would happen. I would have loved to see more of the relationship between Maya and Gauri because I loved the connection they had and what they meant for each other, but it didn’t have the end that I expected, I think the “closure” of this relationship is flat and boring I really expected more

I want to talk briefly about the romance, because I’m sure it could be a problem for many of you. Personally I’ve never been bothered by the whole insta-love thing, because I’m super cheesy and in general I don’t care lol, but this time it was the exception. The immediate eternal love connection between Maya and Amar was absurd, I was so confused, like “Why you even believe what he says?!, you know him like 2 seconds ago !!!!”, but hey, then the plot takes a unexpected turn where it tries to explain and justify this insta-love thing, but I don’t know, I get it, but at the same time it hasn’t been enough for me. I needed to have much more information to understand this point.
Fun fact: Amar means “to love” in spanish and I found that super funny and cheesy every time I read it lol.

The thing I definitely loved about this book is the Indian Mythology, loved that! Everything related to this mythology was most interesting thing, I’m a big Greek Mythology fan and I’ve read a million books with this theme but I had never read anything from Indian so it was a great surprise. I was so interested in the mythological characters that I started researching on the internet. Because although I loved this aspect of the book, I would have liked a better explanation of the creatures and their myths.

The characters themselves weren’t very consistent, I think their personalities were shaped according to how it was developed and how it suited to the plot and this didn’t feel real at all, suddenly we have strong and incredibly decided characters and then the same characters are insecure and naive, Maya is shown as a warrior in moments and then we see her as very insecure character, while Amar although has potential, it’s an extremely flat character, all this didn’t make much sense to me. I think the idea was to create alot of personalities in the same characters so that no matter who reads it, you’ll feel identified in some way, I hope you understand what I’m trying to explain, but anyway, I feel that characters should not work in this way. Always the reader will appreciate more a character that is loyal to their convictions even if you don’t identify with this one, at least I think so.

Well summarizing all this, I think it’s a book with an immense potential,there are many things that could be improved, such as the the characters personalities, the romance, the plot direction and above all, delve deeper into the magic, on the other hand, I loved the Indian mythology, I’m amazed about it, I would like to read something more that contains that kind of mythology. I think my stars are all for the latter and maybe a little for Kamala, who undoubtedly gave all the fun to the book, and the writing style, which although it’s a bit confusing have poetic and beautiful aspects.
I’ve heard that many recommend this reading for those who have enjoyed Daughter of Smoke and Bone or Cruel Beauty, and I couldn’t speak for the latter one, but personally I’m a big fan of Daughter of Smoke and Bone and I don’t agree with this, I think they share a single aspect of the plot, but that’s all for which I could compare it

I recommend it if you’re looking for a poetic reading with a beautiful writing style, a bit of fun and Indian mythology. If you can put aside the insta-love, the lack of character and magic development, then surely you can enjoy it!

22 thoughts on “Book Review: The Star-Touched Queen by Roshani Chokshi”