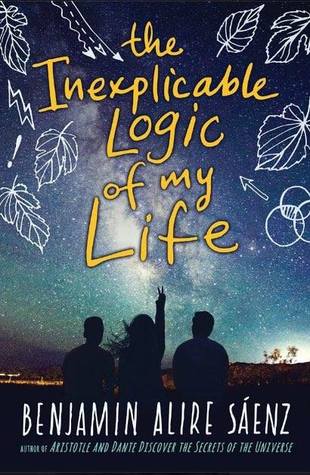 Title :  The Inexplicable Logic of My Life

From the multi-award-winning author of Aristotle and Dante Discover the Secrets of the Universe comes a gorgeous new story about love, identity, and families lost and found.

Sal used to know his place with his adoptive gay father, their loving Mexican-American family, and his best friend, Samantha. But it’s senior year, and suddenly Sal is throwing punches, questioning everything, and realizing he no longer knows himself. If Sal’s not who he thought he was, who is he? This humor-infused, warmly humane look at universal questions of belonging is a triumph.

I really liked it, like a lot!, I still like Ari and Dante a little bit more, but anyway the writing style of this book is just as wonderful

I believe that the plot in brief is about Salvador trying to find himselfand find out who he really is, when I started to read the story and I became more acquainted with this character, I immediately realized that he’s a lost boy , ie, I like him and you learn to love him , it’s sweet and generous, but at the same time things begin to happen to him, he has changes in her personality where he become aggressive at timest, his puzzles him and makes him think that maybe it’s not as good as everyone says it is. Which makes you think that he sincerely can’t find him place in the world and many things are going through him head. For what I could say is a self discovery trip to Salvador, where we will see him go through many stages of growth, we will see him suffer, laugh, and learn how life works.

Vicente is the Salvador’s adoptive father , he’s simply UNIQUE, I love this character from the beginning and I end up just loving him more, I’m amazed by his behavior, he’s so warm, kind, understandable, he’s just a Great Father, not just for Salavador, for Sal’s friends too.
I like so much how he manages his sexuality, being open and honest with his son, I’ve highly valued that.

Samhas been Sal’s best friend since ever, and the relationship between them is quite particular to me.
They are completely opposite characters and even so they’re capable to build one of the most solid friendship I’ve read.
Sam is strong and independent, she’s very problematic on the one hand but on the other you can see how fragile she is, she needs that love that Sal offers and Sal needs the raw reality that Sam can offer him, they are a great team.
There were moments that I have to confess that I could feel a sexual tention between them at times or at least that’s what I’ve perceive.
In short I’ve loved this relationship, one of my favorite things in the book.

Then we have Fito, also a friend of Sal, he is one of the most adorable people in the world, is that he has touched my heart, he comes from an abusive family and with a lot of drugs and yet he has had the ability to take care of himself and to be always directed to the right path, this character destroys my heart, because my mind can’t understand so much suffering and loneliness for which he has passed and I just want to hug him forever.

Family is the main theme of the book, that is very easy to see, the intra-family relationships and the different problems within it.

Each of these characters has a totally different life experience, which makes them unique and they can also have incomprehensible personalities, react in a way and talk in a way that seems inappropriate, but do you know what?
Yes, there were things that made me uncomfortable for moments, things that you will see when you read the book, but there is more than that, you have to keep in mind, that the ability to create characters so real that Benjamin has, is incredible, no one will react like another, and maybe that’s a problem for you but it’s the reality and I love the variety of personalities in this.
And I clarify this because I have seen that some people felt offended or thought that some expressions of the book were out of place, and that can happen , of course!, but that comes with the variety, and is that no one is equal to anyone, nor thinks the same as anyone, and above all no one is expressed in the same way and it’s important to take that into account before judging an entire book just for a few unfortunate phrases, Just keep an open mind. But that’s just my opinion :).

If you want to know why my note hasn’t been complete, it’s simply because I felt that the book is too long, the chapters are short which is great, but at the same time there are repetitive chapters and that’s annoying me.

Good to finish because I left a little long, YES.Will I recommend the book?
The plot is very complete, has topics such as adoption, diseases, sexuality, friendship, family, self discovery and loss.
If you are interested in something of this , then you will probably enjoy it.

8 thoughts on “Book Review : The Inexplicable Logic of My Life by Benjamin Alire Sáenz”